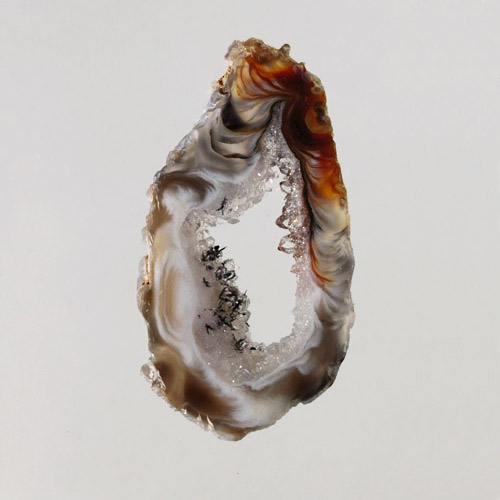 What fun these are! Stunning geodes lined with quartz crystals have been cut into slices, a job that undoubted requires time, patience, and extreme skill. The slices range from 3 to 5mm thick, and the “frame” is naturally-patterned agate, polished on both sides, so they can flip over and still look pretty. Tiny, perfectly-formed quartz crystals sparkle along the interior rim. Loop a soft cord through them, drill a hole through the agate, make an interesting bail, prong-set them flush on top of an open or closed backing (with perhaps a different stone set in the center!), wire-wrap them (on the outside, away from the crystals)–the design possibilities are endless. They are agate, so they are fairly sturdy, but they won't survive being dropped on tile or cracked against a hard surface…Treat them as though you were working with a cross between a glass cab and a druzy, and they should be just fine.