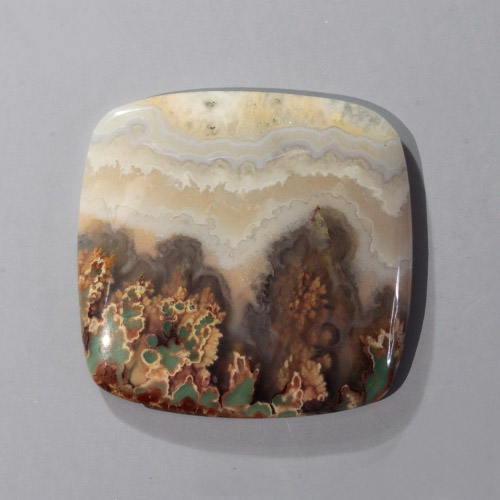 Agates are made out of quartz or silicated material, and they are among the most common gemstones on earth. However, the usual form of agates is either solid color or banded patterns. These plumed agates are rarer, and they form when oxide minerals grow within the agate when it is still in a gelatinous state. So it's possible for plume agate inclusions to resemble natural forms such as ferns or flowers. Most often, the resulting patterns look very abstract, but sometimes they take on landscape imagery. Most of these stones have pure quartz areas of transparency or transclucency. Sometimes those areas allow light to come in from the back of the stone. Other times, the transparent areas are exactly like windows, allowing a rare glimpse into the heart of the stone. The cabochons on this page are hard and durable, in addition to being beautiful.